Since we live with two fluffy, spoiled akitas, we try to be responsible dog owners. When we got our home, one of the first things we did was put up a fence. We then build a designed dog-house for our pooches, complete with shingles, doors and raised floor (of course, they refuse to use it). When we walk our trusted doggies, we take them on leashes and bring bags to pick up the unmentionables.

The fence is a big deal for me and so are the leashes. I know we’re not perfect dog-parents, but I could not forgive myself if my dog got run over by a car or bit someone because I didn’t put up a fence or because I let them wonder off-leash.

That’s why it’s so hard for me to understand why other people let their dogs wonder unsupervised.

We do live in the country and things are more relaxed here. Still, the law says that dogs have to be on-leash and behind fences. However, there have been many a time when we’ve been walking that a strange dog has come wondering towards us. Usually, one word from me sends the dog back to their home…Usually.

Yesterday, we were walking our two wonder-dogs when there was a blur and a strange dog was on top of Ocean, growling.

I screamed (terribly useful, I know), my hubby stared in shock and River attacked. He only got to bite the dog once. But it was enough. With a yelp of pain, the strange dog ran off while I was still trying to understand what had happened.

River. Attacked the other dog.

This is the dog that loves kisses, that follows me around everywhere (even to the shower), that loves cheese and cucumbers, that hates shouts and loves to watch animals on TV. He’s more of a fluffy teddy bear than any other dog I have ever had. When I feed him a treat, he takes it with his lips so as to avoid hurting my fingers. He hates it when I leave the house and gives me the saddest look of reproach. He sleeps at my side and would sleep on the bed if I let him.

River, snuggling into his bed

River asking for kisses and snuggles

No matter what I think of the law or people’s choice of care with their pets, I was concerned that the other dog might have been injured. I suggested trying to follow it home and see if it was okay. My hubby canned that suggestion explaining that taking our two akitas after the strange dog was definitely not a good idea. 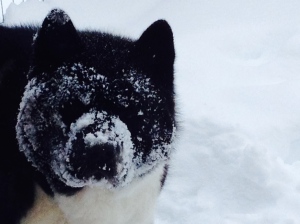 Today, River is back to his snuggly, loving self. I’m still trying to process what happened.

2 thoughts on “Where River shocks me”