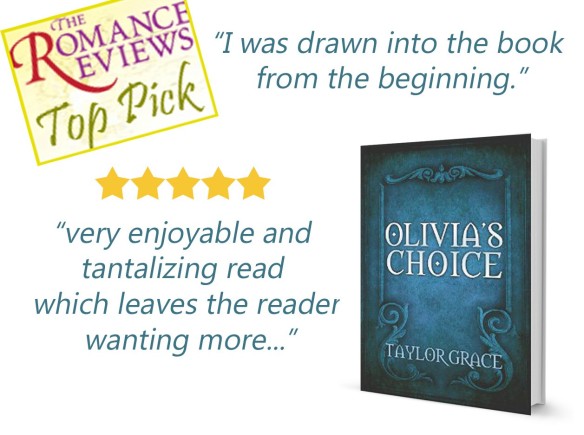 When a job change forces Olivia to return to the annax city, the last thing she needs is their arrogant leader, Baphrem, as a coworker. Trying to show him who’s in charge, Olivia risks more than her life, she risks losing her heart. 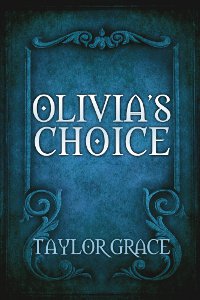 Other great reviews for Olivia’s Choice:

Buy it at amazon.com, here.

Get it FREE at Smashwords, here.

The annoying Captain was studying her and she was trying to act nonchalant—not easy while rain kept soaking her suit and running down her neck. His stare was unnerving and not just because of those very non-annax eyebrows. Olivia had a sense he could tell a lot about her simply by staring at her. Hogwash, of course, but it set her on edge. If she tightened her teeth any harder, she was going to break them…or possibly get lockjaw.

He took two steps closer to her. “Your eyes look…almost…annax.”

Olivia swallowed and looked away, hiding them from his stare. Panic unfolded in her belly, robbing her voice of strength. “Well, they’re not.” It came out in a mousy whisper that she immediately regretted. Damned, idiotic annax. He was pushing all her buttons.

“What do you want with our larenleader, human?”

“Sorry. Can’t tell you that.” She didn’t sound sorry at all and she knew it. “What I can tell you is that he’s expecting me.”

Captain Arrogance decided to consult the geniuses behind him. “What do you think, guys? Should we let her through?”

It was like waving a stake at a group of piranhas, they came instantly to life, looking deadly enough to scare Hannibal Lecter. “Hell, no.” The really big one gave her a very unfriendly grin while the rest shouted advice that was both confusing and, at times, contradictory.

And because she was more than a little terrified of both the situation and their reactions, she reacted without thinking. “Well, if anyone ever doubted Darwin’s theory of evolution, your display would convince the most obstinate disbeliever,” she told the group.

There was a collective silence at her statement, then the Captain moved forward. “Perfect,” he grinned and grabbed her.

She let out a shriek that shook the trees to their roots and struggled frantically, but nothing stopped the Neanderthal. While the rest of his entourage cheered wildly, he tossed her over a shoulder, dragged her to the stream and threw her in. With a bone-rattling scream and a very loud splash, Olivia went flying into the water.