So, you want the peace and tranquility, the privacy that comes with living in the country, do you? Before you put up the For Sale sign, check this out. Here are three things I wish someone had told us before we sold and moved out to the boonies.

If you’re out in the country, you will need a well and not all wells are the same. They can be dug or drilled and, though there are tons of reasons for one or the other, the bottom line is that you want a drilled well. Otherwise, you’ll get soup instead of water.

But that’s not all you’ll need. Unfortunately, having a well doesn’t guarantee having potable water. You might get amazing, clear, bacteria-free water, but odds are you’ll need to do something to your water before you can drink it. It all depends on what’s under the ground where you dig and, though some people go around with sticks to find water, it’s basically random luck.

We had a well and got basically mud instead of water. So, along with the well, we had to have a sediment remover, an iron-blaster (to take out the iron from the water or it will ruin your clothes and pipes) and a UV light to remove all bacteria. The entire system cost about 5K Canadian. For the first year, we tried all sorts of other cost-efficient methods and only ended up with yellow-stained clothes and dirty water. If I had known what I know now, I would have installed the system at the very beginning and saved myself the aggravation.

You need a generator in the country. First of all, a generator is a machine that gives your house electricity when the power is out (Before we moved to the country, I didn’t know what they were…city girl!). There are different types, of course, but you want the one that runs on gas so that it’s guaranteed to work and won’t stop.

There are different strengths in generators. Some are so puny they can only power a bird house and others power hospitals. How much power you’ll need is up to you and what your needs are in your home but the bare minimum is one that keeps the following running: The heater – in winter, that’s a must in Canada or the pipes will freeze and destroy your house; the fridge and freezer in the summer – or you’ll be out of food and the sub pump – or your basement will get flooded faster than you can say gah!. You might also want one to keep the pump running that sucks water from your well or you’ll have no water while the power is out. And, finally, you might want want your kitchen to work so you can cook.

The reason why it’s a must is because when the power goes out, Hydro workers will always start fixing the power for the major cities first, then move to the smaller towns, then to the tiny towns and finally to those living in remote locations. Being last on that list means that you have to wait not hours but days every time the power goes out. Since climate change is making that a reality in both summer and winter, you need to have a back up plan or you’ll end up living at your local Tim Hortons Cafe.

Again, I had no idea what a septic tank was before we moved to the country. And, once we got one, I had no idea how to take care of one or what we could or could not throw down the drain. Adjusting to it was a steep learning curve for a city slicker like myself. It involved a lot of online searching and asking those who had lived with one for years.

A septic tank is a tank that is situated in the ground near your country home and will act as a sewer by containing all the things you throw down the drain. It does a little more than just contain things because it lets water seep out and has bacteria to deal with the biodegradable material that ends up there. This being said, septic tanks still need to be emptied every 5 years or so–depending on the type, size and number of people in the house.

The thing about septic tanks is that they can act up and that is really, really bad news. You can end up dealing with everything from foul smells to a back up of sewage. To avoid those ghastly situations, you want to keep your septic tank happy and working well. That means you have to watch what you throw down the drain and you have to add good bacteria to your tank from time to time.

It also means you have to watch the chemicals you use; like bleach. In the country, you simply can’t use bleach. It not only keeps your whites white, it also kills all the good bacteria in your septic tank. So, no matter how yellow those sheets get, keep the bleach at the store.

Another thing to keep in mind is that you cannot throw anything down the drain that is not biodegradable. That includes everything from feminine products to left over paint from your adventure as an artist. Even left overs have to be composted and not thrown down the drain.

Finally, you can’t use too much water or your septic tank will have a fit. That means, if you are running laundry, you can’t turn on the dishwasher or have a shower. You have to watch how many showers you have and emptying or filling a bathtub is something that has to be planned ahead of time.

That’s it, those are the top three big things I never knew and I wish I had known before we moved out to the country. I know they might sound dire but all the require is a little adjustment. After a couple of months, working with them becomes automatic and there are amazing bonuses to living in the country that you just can’t have in a city. The peace and quiet, the animals you see, the serenity and the beautiful trees, there are things in the country that make all the hassles with wells, septics and generators worth it.

So make a cup of tea, sit on your porch knowing there isn’t a soul around and just watch the clouds go by. Life in the country has no parallel. 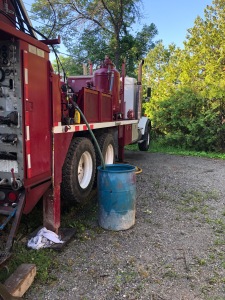 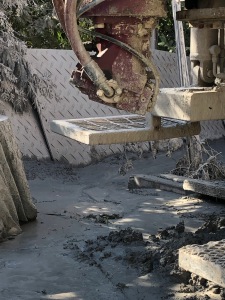 I might have mentioned that we live out in the country. That means no municipal water access. Instead, we get our water from a well.

Ours has run out of water.

The first thing that happens when you realize you have no water is you need to pee. It’s almost instant. No water, must go to the bathroom. But, of course, you can’t flush. And you can’t wash your hands!

The next thing we did was to call a plumber and wait, hoping that by luck, whatever had dried our well, would fill it up.

When a well doesn’t work, people tend to panic and we were no exception. We called every person we would find that had something remotely to do with water or wells or homes or dogs or humanity…And everyone had advice that was both confusing and, at times, contradictory.

Our plumber (who didn’t look a day over 18) told us to drill a new one. Our neighbours (who have lived in the area for over 20 years) told us to sit and wait. The city officer we got on the phone told us (after many calls and messages) to not bother him because he had nothing to do with wells.

So, while we sit here in our own filth, do you want to check out an awesome blog? While I avoid the heavy topics in my little blog, this one deals with them head on. And while most people beat around the bush, this blog gives it to you straight. Check out Just Gene’O and let me know what you think!