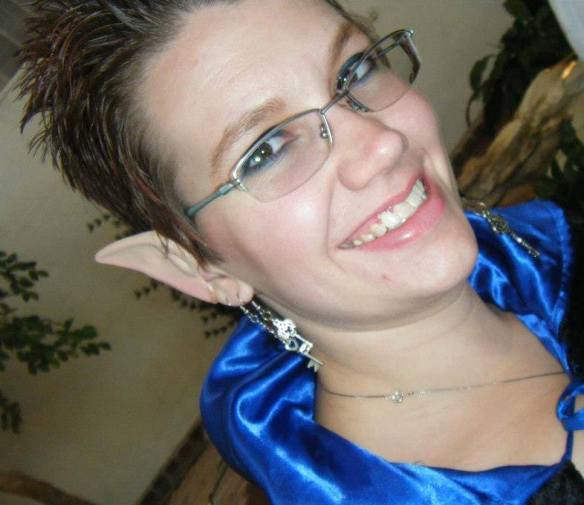 Crystin says of herself: “First and foremost, I’m an author. *blushes* I’ve always wanted to say that. But seriously, my first book was released March 2, 2014. UnBlessed can be found in a number of places, mostly online. Amazon and Barnes and Noble both have links, or you could visit my personal estore if you want to be super supportive!  https://www.createspace.com/4695914

I have a lot of favorite authors, books, and series – which I’ll include below – but I wanted to mention my inspiration, idol, and hero first: Anne McCaffrey. Her diversity blew me away when I was in high school. After reading her Pern series and then diving into the totally different yet just as wonderful Tower and the Hive series, I remember thinking, “Wow. One person thought up these two rich, complex worlds. I want to be able to do that with just one.” Many years later, Myrillia was born.

As for some of my other favorites, they include: the Hollows series by Kim Harrison, the October Daye series by Seanan McGuire, the Anita Blake series by Laurel K. Hamilton, R.A. Salvatore’s Drizzt series, the Dresden Files by Jim Butcher, and Christopher Paolini’s Inheritance series. Yes, I’m a Harry Potter fan, and I’m not ashamed to say I like Twilight. Well. Maybe a little ashamed.

Another fun fact? I’m a HUGE World of Warcraft fan, and an avid player. Note I said avid, not accomplished. No, I’m not a raider. No, I don’t PvP. I don’t top DPS charts (well, I do occasionally – I’m not a bad player). I tend to lean towards collecting … everything. I have one of each class over level 20 (and that’s without refer-a-friend bonuses), and over five max level characters (pre-Warlords of Draenor). If your a WoW player, too, feel free to look me up: you can usually find me on Kieve – Lightbringer, Jahline – Lightbringer, or Teruaki – Earthen Ring.

Oh, my final note? I’m amateur artist, mostly with animation style drawings. Especially anime style. (Yes, I like anime, too. You couldn’t guess that from the reading and gaming clues?)”

These are her favourite books:

The entire works of Anne McCaffrey
The October Daye series by Seanan McGuire
The Hollows series by Kim Harrison
The Legend of Drizzt by R.A. Salvatore
The Anita Blake series by Laurel K. Hamilton
Twilight by Stephanie Meyers
The Harry Potter Series by J. K. Rowling

She’s written UnBlessed, the first book of the series Blessings of Myrillia. The second book, Fire Blessed is due out in late 2014. 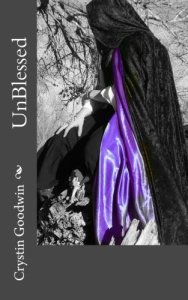 I reviewed UnBlessed and found it outstanding. Click on the cover above to buy it from Amazon.com

She has her own blog at crystinlgoodwin.wordpress.com where she does everything from share reading list to reviewing books.

So, want to know an author before they become famous? Check out Crystin Goodwin, an up and coming author with a very promising future and tons of talent.

UnBlessed is the story of a teen trying to find out where she belongs. It’s a fantasy story in a different world but, for all its differences, it was familiar. The Melior city is familiar, the people react the way we do and the theme of belonging is one of my favourites. I had only read a couple of paragraphs and I had to find out what was going to happen.

Kisara is a Melior and their entire youth is focused on one event, the Blessing Ceremony. Like her peers, she’s been looking forward to it for years. She has her special dress ready, her friends at her side and her mother to support her. Things work out well for her friend, Lucien but they go very differently for Kisara. I won’t divulge what happens but I will say it’s unexpected and very important.

I loved the speed of the book. I honestly picked it up and didn’t put it down until I read the entire thing. It’s fast, unpolluted with long-winded speeches or stories, and it caught my attention from the start.

I loved Kisara. She was gutsy, likeable and kept her chin up in spite of being in some very difficult situations. I liked Lucien as well. His heart is always in the right place and it’s actually painful to see him try to do what’s right but end up messing up.

Sebastian and the Transeaturs had me at the start. They’re some of my favourite parts of the book. They’re mysterious, powerful, thrilling and kind all in one race. Amazing. Loved them.

Kisara’s journey makes a wonderful story, fun, light and with fantastic ideas. It’s an easy world to get into and one I would highly recommend.

Teaser Tuesdays is a weekly bookish meme, hosted by MizB of Should Be Reading. Anyone can play along! Just do the following:

• Grab your current read• Open to a random page• Share two (2) “teaser” sentences from somewhere on that page• BE CAREFUL NOT TO INCLUDE SPOILERS! (make sure that what you share doesn’t give too much away! You don’t want to ruin the book for others!)• Share the title & author, too, so that other TT participants can add the book to their TBR Lists if they like your teasers!

“When he squeezed in sympathy, she looked up and smiled weakly. “I’m okay. There’s always next year, right?” ”

Pg. 18 from unBlessed by Crystin Goodwin.