We have a few new residents with us…of a different sort. Here’s one of them.

Okay, it’s a plant, still, these living creatures are particularly hilarious. Check out this next little bundle.

I mean, what’s that? It’s a plant but it’s made of little balls of green. I think it’s just a hoot. Look at our next character. 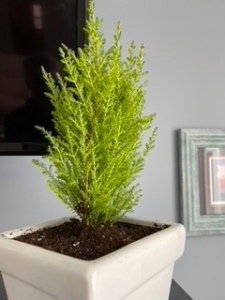 He even smells funny! This guy smells like lemon! Hee hee!

This guy is super picky about living conditions; just your typical snooty neighbour, except its a tree.

Finally, this guy who is also super picky and thinks it’s a tree but isn’t.

There you have it, our newest little guests who, it seems, the smaller they are, the bigger their personality.

Our new house still feels…a little strange. We’re making it ours, a little bit at a time but there are parts that are still alien and don’t feel quite like home. This is why finding things that I love and make me smile was key today. Here are some of my favourites.

The first one is a tiny bud from a fern. Isn’t it adorable?

The second one is the tiny baby of an ivy. Super cute! 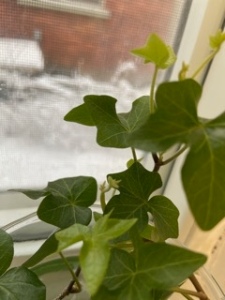 Then, of course, there is this majestic, awesome tree in our front yard that defies description. It’s simply incredible.

And finally, our poor delivery guy who tried to get up our insanely steep driveway and failed.

Poor, poor delivery guy. Should I admit that I laughed and laughed as the van slid down the driveway over and over?

My hubby was determined to have a potted plant. He got a plant and a pot but guess what he forgot?

The blue arrow is for the pot. The red is for our planter.

I have no idea how she’s learned that. Especially since she still doesn’t seem to understand the concept of not jumping up at people who are all dressed up on their way to work and smear them with dirty paws. You’d think the word: No! And Down! wouldn’t be that hard to understand, but Ocean seems completely stumped as to their meaning. Opening doors, on the other hand, she’s got that pat down. 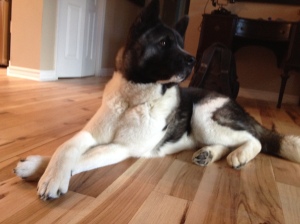 The culprit…trying to look innocent

Unfortunately, Ocean has a passion for dirt that no amount of healthy doggie food will ease. Some time ago she discovered our poor plant and the dirt on it has become her doggie version of heaven. So, she tries and tries to get at this plant hidden in our office, that’s dying from lack of, you guessed it, lack of dirt. Once there, she eats the stuff until the roots show leaving traces of her snack all around the pot of the plant.

Up to now, I had stopped her from killing the innocent green creature by closing the door…but the last two days, I have woken to find the door open in the morning, dirt all over the floor and, I swear, Ocean licking her lips.

Today, after work, I actually caught her in the act. She had her dinner but refused to settle like the already comatose River, and snuck to the office. I crept after her and, sure enough, there she was, jumping up with unbelievable determination until her one paw hit the door handle and opened the door. Then in she went, to dirt heaven.

So, I think this weekend hubby and I will go get another plant (this one is a pretty past tense thing) and will move the pot and the plant into the living room so that we can keep an eye on it and Ocean can’t sneak around at night and get at it. As plans go, this one isn’t foolproof but its something.

I have no idea why she likes to eat dirt. There must be some worm DNA in there somewhere in akitas because otherwise how can you explain that she likes dirt but is very picky about kibble?

On the other hand, its a sad reality is that, in our house, we have to rearrange furniture and plants not according to taste but according to dog habits.

It’s not like they don’t have kibble to eat, they do and it’s good kibble too. Like most doggie parents, we’ve tried every type of dog food from the B.A.R.F. diet to cooking for them, to the super-expensive, to cheap. Finally, we’ve settled on ours and they love it, so all is well. Until they eat dirt.

I don’t understand it. A dog’s nose is something like 500 times more powerful than a human’s. Dirt doesn’t exactly smell great to me. With their powerful nose, it must smell even worse to them. So, why eat it?

They eat it from the plant inside my office. It’s a delicacy they simply can’t resist because every day, the poor plant has less and less dirt. I keep refilling the pot but there’s no keeping up with my two hungry akitas. Now, the roots are starting to show and soon, the plant will die.

I’ve tried explaining things to them and tried positive reinforcement with treats. Nothing works. Apparently, good cheese doesn’t have the appeal that dirt does.

Maybe they’re trying to tell me something.

Maybe they have prairie dog DNA in those fancy CKC pedigrees of theirs.