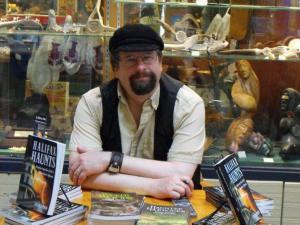 Steve says this of himself:

“I am a storyteller.

I am a writer.

Words are what I work with – whether spoken or written.

A fourth collection – a follow up to HAUNTED HARBOURS – is due out in the fall of 2011.

I have also released a children’s picture book MARITIME MONSTERS.

I have a cat named Kismet who ignores me. I have a beautiful wife named Belinda. I have a backyard full of blue jays, crows, the occasional chipmunk, and dandilions galore.

My Mom thinks I’m pretty cool too – or at least she tells me that.

Have a look through the blog and you’ll find out if mom is lying or not.”

He’s also the author of the very popular Haunted Harbour, among others. 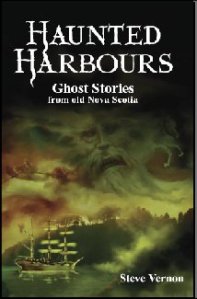 Haunted Harbours has sold over 7 000 copies! You can pick up copies at Amazon.ca , Amazon.com and Chapters/indigo/Coles.

A very talented writer, Steve warns that “…I have a bit of a split-personality when it comes to my writing. In addition to all of the wonderful family-friendly regional books I have released there is a darker side to my work.” Check out Steve’s blog here and find out more about this amazing Canadian author.