It’s absolutely freezing outside. So cold that the snow has become dusty. It doesn’t stick to anything. So cold that when I walk outside, it feels like there’s no air. My lungs suck in and all they get is…a freezing nothing. It’s so cold that when I open the car door, the ominous creak I hear is the plastic bits warning me they’re not doing so well and, any time now, they’re going to snap in two.

In this weather, my hubby and I fear leaving our akita outside for longer than half an hour. I know, I know. She’s designed for winter, she loves the snow and she comes from the snowy mountains of Japan. Call it  projecting or good sense, but we just can’t leave her out for too long in this weather.

Whatever the reason, the unfortunate result is that Ms. Fuzzy Tail is in the house more and, since there’s nothing to do, she’s full of beans.

To get rid of those beans, she chases her turkey doll or her tail, she digs at Groucho the tree, dashes up and down the stairs, she digs into the boots drying by the entrance and begs for cheese. We accept those outbursts of energy that rearrange our furniture and rob Groucho of a few more leaves. We figure she’s doing her best to exercise. She certainly can’t use the elliptical. (I’d have a fit).

Yesterday, at around 11pm, Ocean decided to jump on my bed because she thought I’d love to just go from deep sleep to fully awake in under a second. I woke in sheer terror until I saw her confused, brown eyes. Why was I upset? Didn’t I see that she was bored?

After I decided that a heart attack wasn’t imminent, I gave her some kisses while explaining to her firmly that there was to be no more jumping on any bed. She licked me and completely ignored everything I said or did except for the petting. Sigh. Why doesn’t she jump on my husband?, I thought.

I posed the question to my lovely man and he thought it through with that therapist head of his. “She needs a brother,” he replied with a whimsical smile.

Apparently, kids aren’t the only ones who love fresh snow. Akitas seem to love the stuff. Just a little. We, being new akita parents, didn’t know just how deep that connection to the white stuff went. We found out today though.

We let Ocean out just after it had started snowing with the intention of letting her in before we left. At least, that was the plan. When the time came, I opened the door, called her and…no dog. I called again and…no dog. I cursed (I didn’t have my coat on) and I shuffled outside in my slippers to try and find my missing pet. Immediately, two things became crystal clear. One, my slippers absorb snow, they don’t repel it. Two, Ocean wasn’t coming in not because she was dead or kidnapped by aliens as I feared but because she was having the time of her life and she didn’t want to come inside.

I spotted the full-ball. She was running full kilt from one end of our enclosed area to the other, digging in the mounds of snow, ‘finding’ lost toys under the flakes and discovering new smells here and there. Her usually black nose was white with snow and she barely stayed still. I literally saw her jump into the air before galloping to one corner only to run after a fat snowflake into the complete opposite corner. That white tail of hers was waving in delight and she wouldn’t come near me in fear I’d drag her inside.

We gave her another half hour and then tried to get her inside. When she refused, we accepted reality and went shopping. We got home two hours later, with groceries and, after dumping them unceremoniously in the kitchen, I ran outside to check on my baby.

Ocean was still running around, still chasing snowflakes with her tail still waving in delight. I think she had lost a little of her energy but I might be wrong. It still took a couple of calls to get her inside…and a wee bit of cheese.

I was still a little concerned and checked her over from head to toe inspecting her carefully for any booboos. She inhaled her supper with incredible speed and, after a few kisses, stretched out on her cushion. She was out like a light.

Two hours later and she still hadn’t moved from her cushion. The intensity of her sleep (probably aided by my overdeveloped imagination) worried me a little. Was she alright? Had something happened to her? Should I call the vet? My husband took a look at the sleeping dog, called me a worry wart and sent me to bed.

The next morning she was up earlier than usual, dancing in excitement, asking to be let out. It was a cold morning, minus 12, and windy and the snow had frozen. I shivered and huddled protectively behind the door. She dashed by me, mad with joy.

Winter is a dog’s wonderland.

I have to admit I have ‘special’ reading habits. I’m very picky about what I read but, when I find something I like…watch out. I read like a starving woman. I gobble up the book, read the entire thing in one sitting, don’t even look up, don’t take a break, inhale every page…until it’s done.

Case in point, yesterday I got the book Never Kiss a Rake by Anne Stuart. Now, Ms. Stuart is very good (in my humble opinion). She’s on my automatic-buy list for good reason and this latest book didn’t disappoint. I read the thing. All of it. In one sitting.

It got me thinking. Is that normal? Can reading be addictive?

I mean, I can’t read at certain times. I can’t read before bed because I will simply not go to bed until the book is done. I can’t bring a book to work or I won’t get anything done (I’ve actually snuck them into meetings and gotten caught with my nose between the pages.) I also can’t bring it to the doctors office because you get the weirdest looks when you ask for more waiting time so you can finish a chapter.

I also don’t hear when I read. I mean it. My husband has called my name and I have not heard him. It’s not on purpose. I simply didn’t hear him. I was reading.

And I can’t stop halfway through a good book. It’s actually painful. The only other choice is to read the entire thing in one sitting. Apparently, this is why, after reading for four hours straight, my eyesight is blurry (my eye doctor told me I need to look up more often). Stopping is not as easy as it sounds.

So I got Never Kiss a Rake yesterday and I sat and I read the entire thing. And, yes, the book was good. Really good. But, more to the point, is reading like that normal?

I used to think I was a bit of an odd duck until I joined Goodreads. Turns out there are hundreds of others like me who read…ahem, enthusiastically.

Wanna join us? I’ll be honest, reading like this is simply delicious.

Akitas are a very interesting sort of dog. Since they have the triangular heads and curly tails of huskies, they are often mistaken for that breed but they’re definitely not huskies. They’re also not bullmastiffs.

We’re used to bullies (short for bullmastiffs). You need a lot of kitchen towels with bullmastiffs, especially if you have a male, and lots of food but otherwise, you’re pretty good. They basically sleep all day, every day from sunrise to sunset. When they wake up, they groan in complaint, get up to eat, then fall asleep right after exhausted from the exertion. If you, as the caring owner, should force them to walk, they will grudgingly oblige, but need to sleep for several days afterwards to recuperate. They don’t like toys, or ropes or bones or dig or anything but their cushions. If you don’t get a cushion, you might find a bullmastiff in your bed. Don’t tell me I didn’t warn you. These guys like comfort.

Akitas are very different. They have a lot more energy and a lot less bulk so they can follow you into places where you want them (like the laundry room) and others where you’d like your privacy (like the bathroom). They have a very inquisitive nose which means, on a walk, they have to smell every new scent in the area and that little walk will take forever. Or longer. And they like to dig. A lot. Which means the backyard is more of a dirt-covered mess with holes scattered here and there.

They also have an internal clock whose accuracy could rival Greenwich.

Every workday my akita wakes up a second before my alarm. Not a problem. I like having her around as I get up, get ready and make coffee. I make her breakfast and mine and we eat in silent companionship.

The problem is the weekends.

Our akita doesn’t understand about Saturdays and Sundays and, when I don’t wake up at the standard time, she protests by coming over and licking any bits of me that are poking out of the covers. I’ve tried telling her to go back to her cushion, I’ve tried leading her back to her cushion and I’ve tried begging. Akitas, it seems don’t really care about comfort, cushions or pleads. So, inevitably, I end up awake before 6 am and, on a Saturday, that’s just wrong.

I told her something to that effect this morning when she started licking me at 5:30 in the blessed morning. Her answer was decisive. More licks and some doggie breath.

I was cursing her amazing internal punctuality and moving like a zombie through the still-dark house when it hit me. 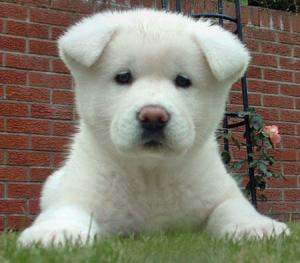