I was working from home when something flashed by and I glanced out the window and there was River, outside the fence, striding among the flowers, having a wonderful time.

We’d like to think we’re responsible dog owners. When we moved in, we installed a six-foot fence along the perimeter of half the back of our house. We also put metal bars at the bottoms and tops of the fence and tied the fence to the bars with zip ties so that they could not dig their way out or bend the fence.

Well, they found a way.

I ran out with leashes in hand and found River pretty quickly. He had probably started to wonder where his next meal was going to come from and was heading home. Ocean was a blur in the distance. I called her, she wagged her tail happily and took off.

Cursing that it was me and not my husband who had found the dogs, I put River inside the house and ran back out towards Ocean. She wasn’t thinking about her next meal, Ocean loves nothing more than to run and she was doing just that.

I shudder to think what out poor neighbours must think as they see these two escape artists legging it around. Big fence but pretty useless. Don’t those people check on their dogs? We should call the pound, the dogs don’t even come when she calls them.

I have managed to get both hounds back. They are delighted with this morning’s activities and don’t show an ounce of shame between the pair of them. They can’t wait to see what’s in store for this afternoon. I, on the other hand, am exhausted.

We are putting a garage on our house. The lack of one didn’t seem to affect my lovely hubby when we bought it two years ago, but having lived through two of our beautiful Canadian winters clearing the snow off his car, he has decided we either move to the equator or we build a garage. Since I am not fond of air travel, I decided on the latter.

Now, after we spent all winter getting a permit for our build, we have two very sturdy construction men coming over on a regular basis to construct our garage. One is stocky and round, let’s call him Gus and the other is wiry and thin but has this massive moustache, the only large thing on his body. Let’s call him Rupert. 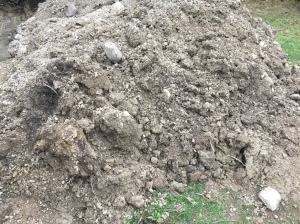 Well, Gus and his buddy have been over all of a day and have already transformed our front yard into a mess. Apparently, building a garage translates into making the deepest hole in the ground possible because they’ve been digging away like earthworms ever since they arrived.

To help them dig even dipper, they took apart our doggie fence and replaced it with this orange mess that I know our dogs will get through in no time. Trying to delay the inevitable, we have snuck all sorts of toys into their doggie house to try and entice them to stay in our yard. 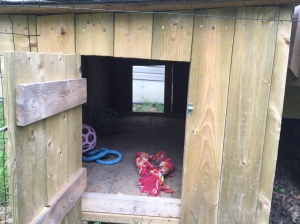 Well, long story short, we’re hoping we’ll have a garage some time in the future. Right now we have a massive hole…and a dubious-looking fence.