River is one of our doggies. He is passionate about his food. That is to say, he won’t so much eat as inhale his kibble. Concerned about that, I’ve gotten him this new bowl especially created for dogs who have his…ahem… enthusiasm for food. 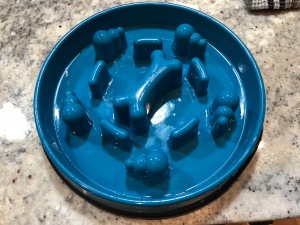 See those ridges? They make it difficult for River to eat his food. He has to lick his way around them and find all the kibble bits that hide under and between the plastic shapes. That slows him down and he doesn’t eat as fast as he did. Which is the entire point.

River wasn’t very pleased with this new development. He stared at his new bowl and then at me with what had to be a pretty dirty look. But his beloved kibble sang it’s siren song and he forgot all about the inconvenience and ate away.

Two days later, the bowl is still doing its job. I won’t lie, I might have done a little dance of triumph.

Oh, also found this great site with awesome ideas for doggies. It’s All My Canine Companions and I found it because Marcela visited my own little blog and commented. Isn’t it lovely how the net works?