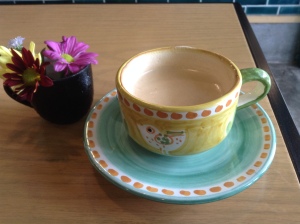 If we were having coffee I’d moan about the fact that, even though it’s Saturday, I have to go to a DayJob thing all day. I know there are jobs out there that do this regularly and I’m lucky that mine doesn’t…but I still like to moan about it.

To compensate for this tragic beginning to the weekend, I’m going to have a second cup of coffee as a treat–hopefully the size of a large bird bath. 😀

If we were having coffee, I’d explain to you that we’ve literally gone from winter boots to sandals in under a week. In true Canadian form, the weather has gone from freezing to boiling∗ in less than 5 days. (*Boiling = Canadian expression meaning anything warmer than freezing.)

My dogs are completely unhappy about this change in the weather. The mosquitoes, on the other hand, are delighted and have appeared by the gazillions∗. (Gazillions = Taylorism meaning a number so large it’s ridiculous).

How are you? How are things with you? Are you enjoying your cup of coffee?

The Weekend Coffee Share was created by Part Time Monster and is now hosted by Nerd in the Brain.

5 thoughts on “If we were having coffee…”